Playing with ChakraCore on Linux

ChakraCore, the JavaScript engine that powers the new Edge browser, has been open-sourced by Microsoft. While currently it only runs on Windows, support for other operating systems is in the roadmap. It is fun to follow the progress of the Linux version of ChakraCore.

Obviously, nothing works on Linux yet since the porting is still in its early stage. For a start, ChakraCore Windows is built using Visual Studio. For other platforms, the build process needs to use CMake.

On top of that, Windows-specific API needs to be abstracted. The ChakraCore team decides to bring the important bits and pieces from CoreCLR, another open-source .NET core runtime from Microsoft. CoreCLR already contains the so-called PAL, Platform Adaptation Layer, that deals with file handling, memory management, thread, etc. It does make sense to leverage PAL since it already works quite well for multi-OS support in CoreCLR. 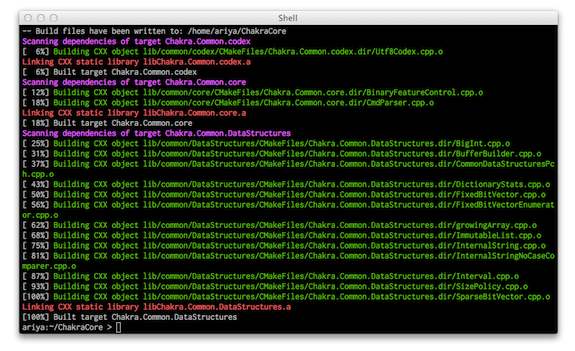 How to play with ChakraCore Linux? The easiest is using a virtual machine so that you can do it if your host machine is OS X. In fact, even on Linux host, it is quite beneficial to isolate the setup from your main working environment. I use Vagrant since this is the fastest to prepare. Since ChakraCore Linux requires Clang version 3.5, the easiest is to base your system on Ubuntu 15.10 (Wily Werewolf):

You need a couple of good packages:

Switch from GCC to Clang:

Now the party begins. Clone the repository of ChakraCore, switch to the Linux branch, and have fun!